Onsen hot spring in Japan has become an international sensation. It is now on a must-do list of many visitors to Japan. According to the Nippon Onsen Research Institute, there are about 3,159 registered onsen areas in the country, discharging a whopping 2,777,894 liters of hot spring per minute. 22,772 accommodation are available throughout Japan and approximately 137,088,966 people visit onsen areas annually. 5 Best Hot Springs in Kanto Area Japan!

Now the most important question is which onsen to visit.

Let’s take a look at top 5 Best Hot Springs in Japan – Kanto Area. How many have you been to? We’ll tell you our favorite one at the end (the top onsen in Japan). 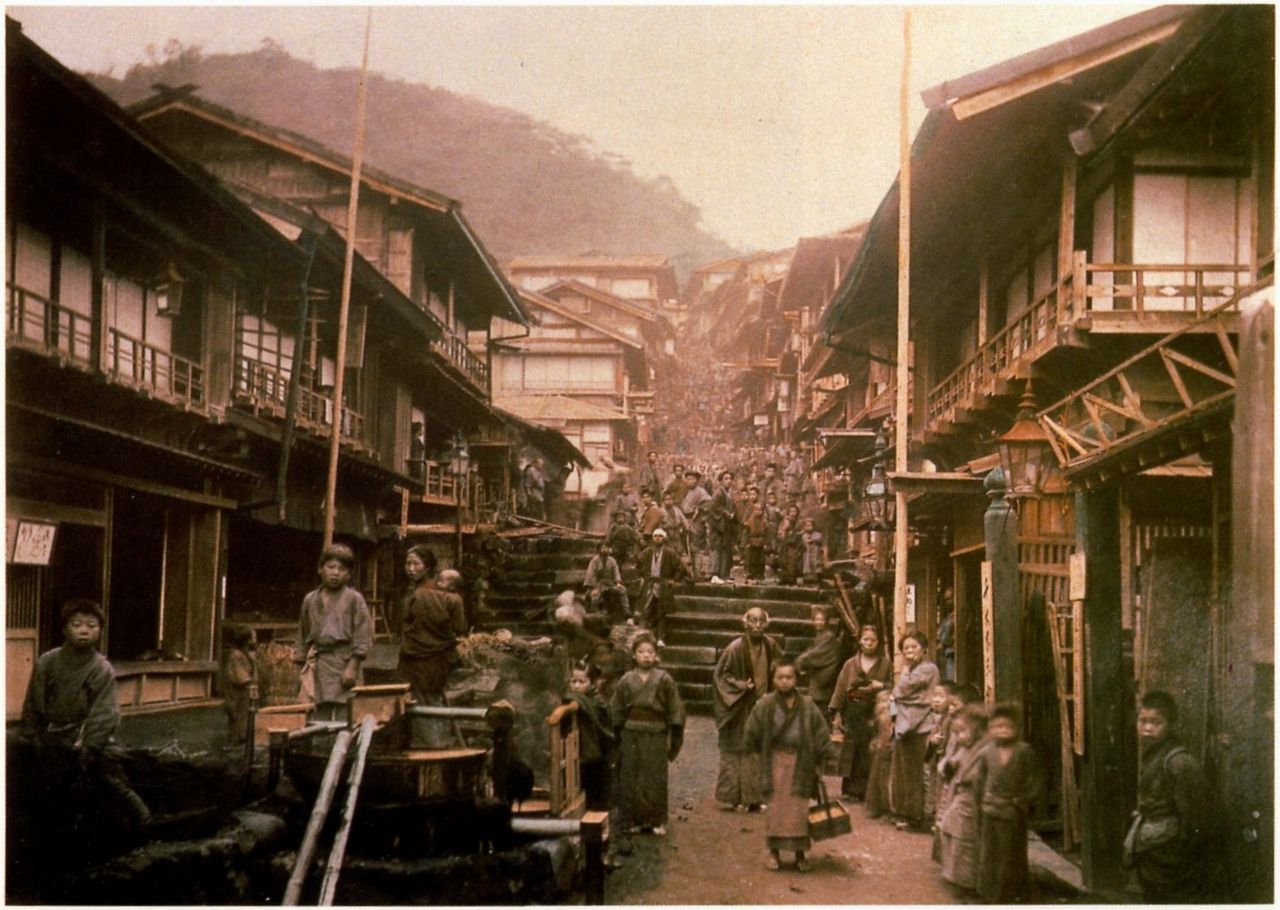 Shibukawa Ikaho is a hot spring town located on the eastern slopes of Mt. Haruna in Gunma Prefecture. Developed by prominent daimyo Takeda Shingen during the sengoku warring period, Ikaho is well known for its reddish brown, iron-laden thermal waters.

In addition to high quality onsen, Ikaho is also admired for its nostalgic area with steps, called Ishidangai or Stone Steps Street, which has been enjoyed by visitors for centuries. It’s just so much fun exploring the Ishidangai and visiting shops and taking photos along the street while wearing yukata kimono from your ryokan. The nostalgic feel of the street takes you back to the past. 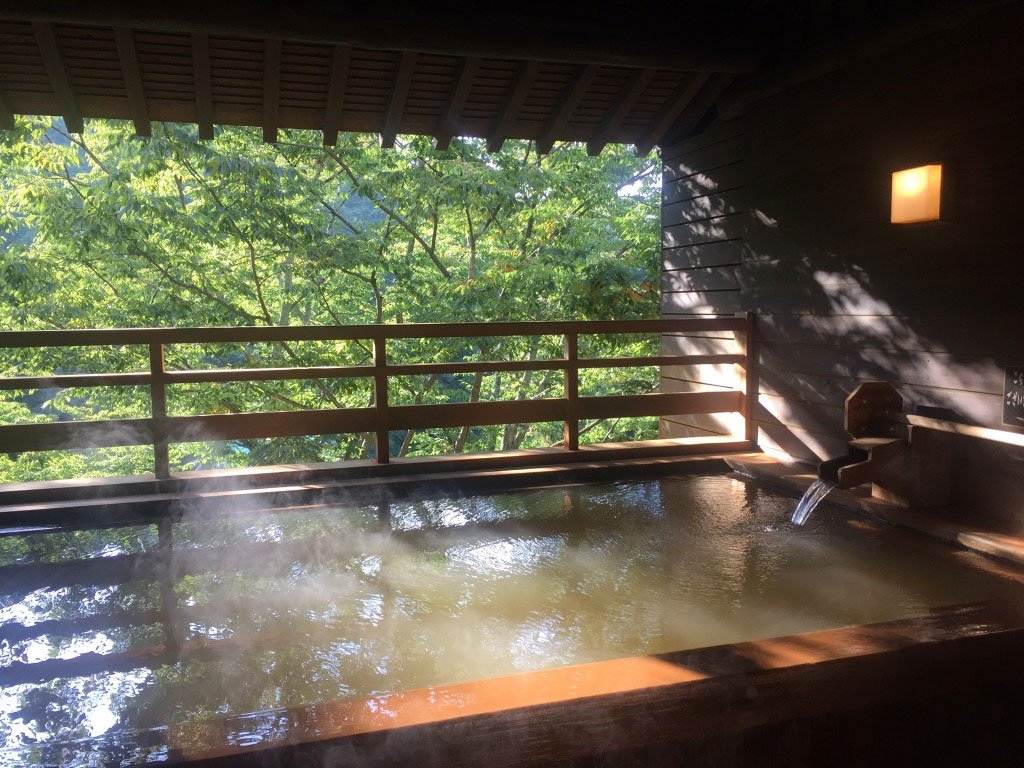 Stay there overnight and enjoy bathing in hot spring at your accommodation as well as visiting other onsen open to public.

How to get to Ikaho Onsen

Take JR Josetsu/Hokuriku Shinkansen from Tokyo Station to Takasaki Station and take a 20 minute bus ride from there to Shibukawa. Instead of the bus, you could also take a local train along the JR Josetsu or Agatsuma Line to Shibukawa (approx. 25 mins). The total cost is around 5,000 yen one way.

If on a tight budget, take a local or rapid train on JR Takasaki Line from Ueno to Shibukawa Station and take a local train to Shibukawa. This is the slowest, but least damaging to your wallet – 2.5 hours and 2,270 yen one way.

Bus departs from Shibukawa every 20 minutes to Ikaho Bus Terminal, operating both ways between 5:30 and 21:00 everyday. 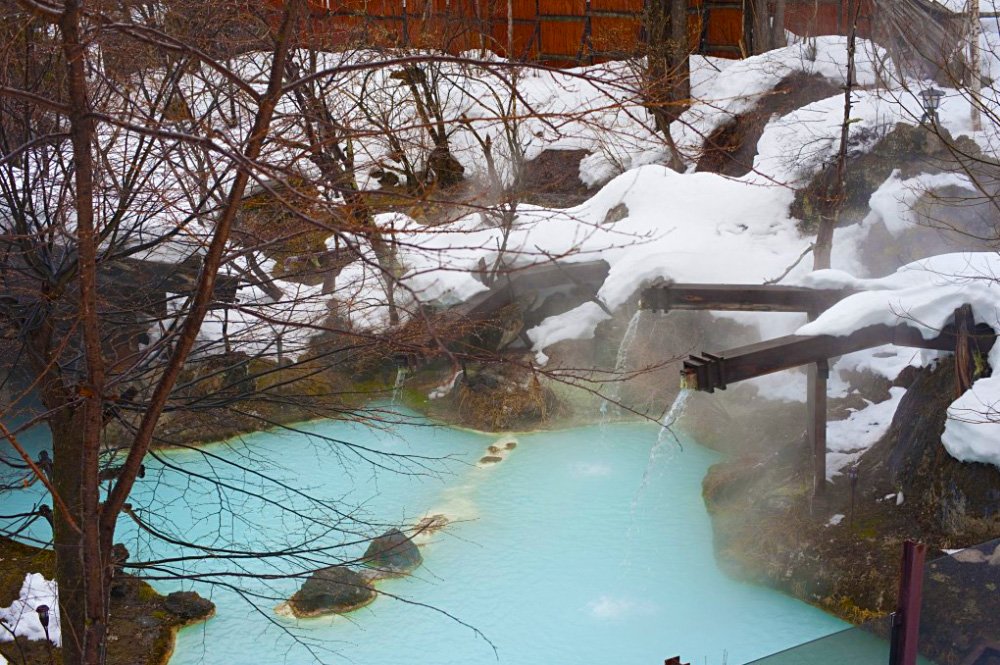 There is one public onsen in Shirahone onsen area, which is worth a visit. It is a very nice open-air public onsen path, but it’s not open during winter.

How to get to Shirahone Onsen

From Tokyo, take Nagano Shinkansen to Matsumoto (2 hours and 50 minutes). Get on Matsumoto Dentetsu Line to Shin-Shimajima (30 minutes). Take a bus to Shirahone onsen (70 minutes).

Located only two hours from Tokyo, Kinugawa onsen is a very popular onsen resort along the Kinugawa River (literally ‘angry demon river’) in Tochigi Prefecture. Many of its visitors plan to visit nearby Nikko Toshogu Shrine, the UNESCO World Heritage Site. 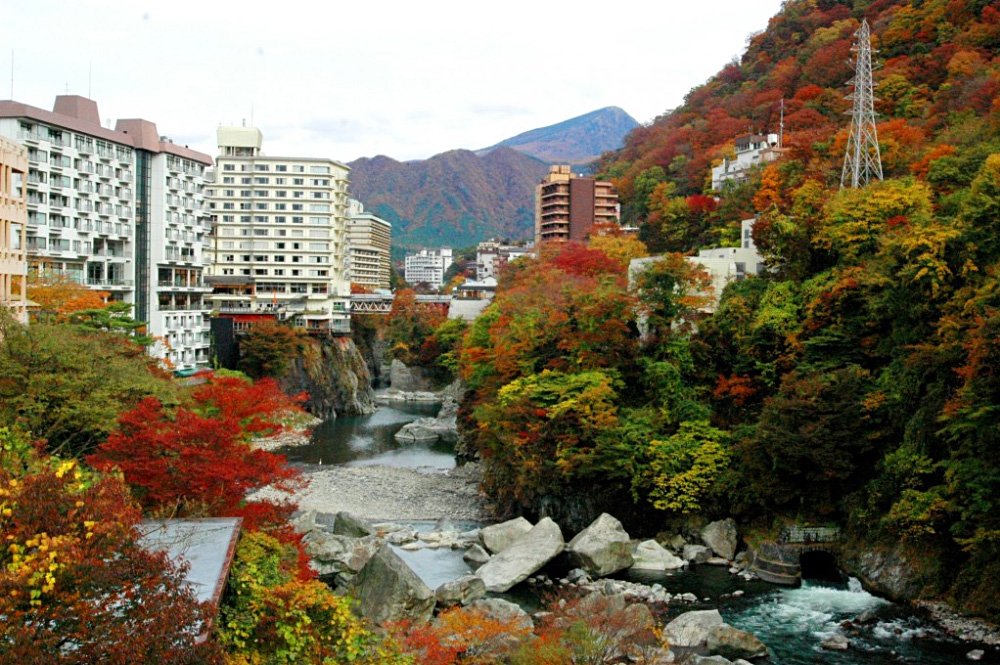 Kinugawa onsen town began to develop in the early Meiji period and the area saw an expansive development in the 1970s. Although Kinugawa experienced economic difficulties in the 1980s, it is now enjoying a revival thanks to an increasing number of foreign tourists. 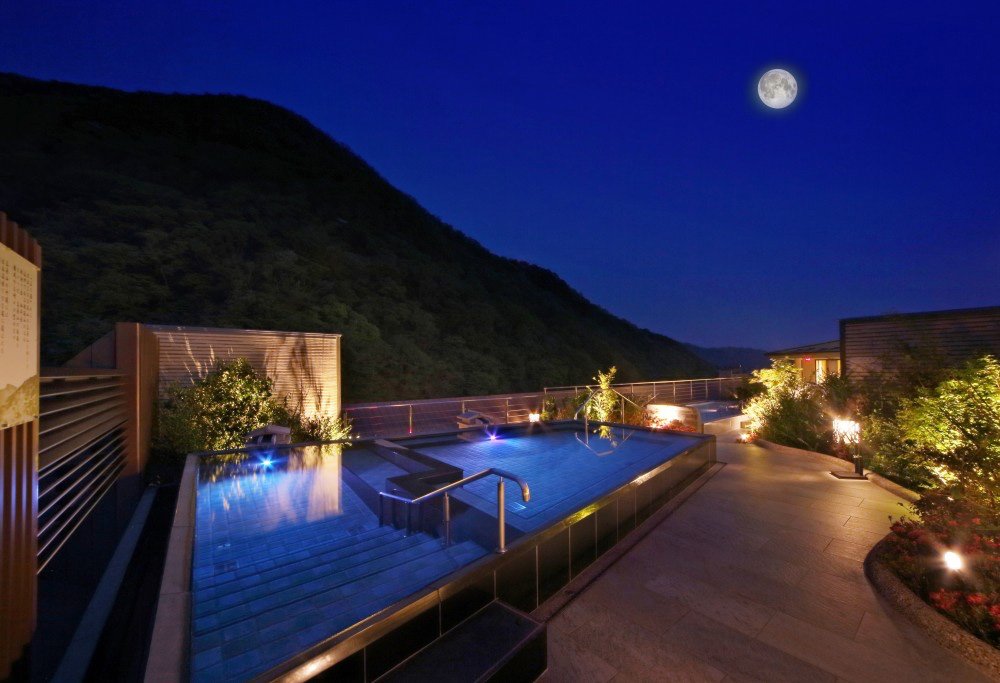 Kinugawa is known for Alkaline hot spring, and it is believed to be good for skin and to relieve muscular pain, arthritis, hemorrhoid and more.Some would say it is the best onsen in Japan.

How to get to Kinugawa Onsen

From Tokyo or Ueno Station, take Tohoku Shinkansen to Utsunomiya Station first, and then get onto JR Nikko Line to Nikko Station (two hours for 5,060 yen). For more information, visit here.

Kusatsu onsen is definitely one of the must-visit onsen areas in the entire country. Located in the heart of Kusatsu onsen town, the Yubatake, the hot spring field, is the symbol of Kusatsu, producing large volumes of high quality hot spring with a distinct smell. 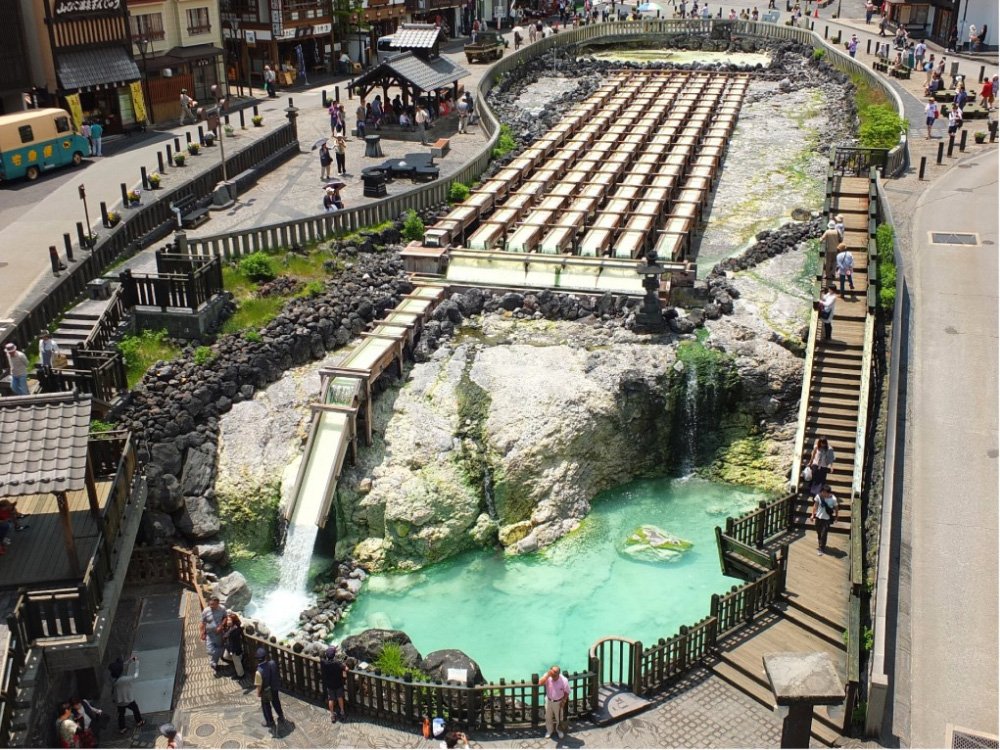 It has a long history – according to the legend, either Yamato Takeru (the legendary prince of the Yamato dynasty) or Yamabushi hermits discovered the Kusatsu hot springs, but there is actual evidence of this. Another folklore record suggests that Minamoto Yoritomo came to Kusatsu in 1193 and bathed in the Yubatake.

Two bathing styles that are unique to Kusatsu are Jikan-yu (‘timed bathing’, where bathers face a small indoor shrine and pray) and yumomi (‘stirring hot spring’) and they have been handed down since the Edo Period. You can try the Jikan-yu at Chiyo-no-Yu Public Bathhouse for 560 yen, at 9am, 11am, 2pm and 5pm. 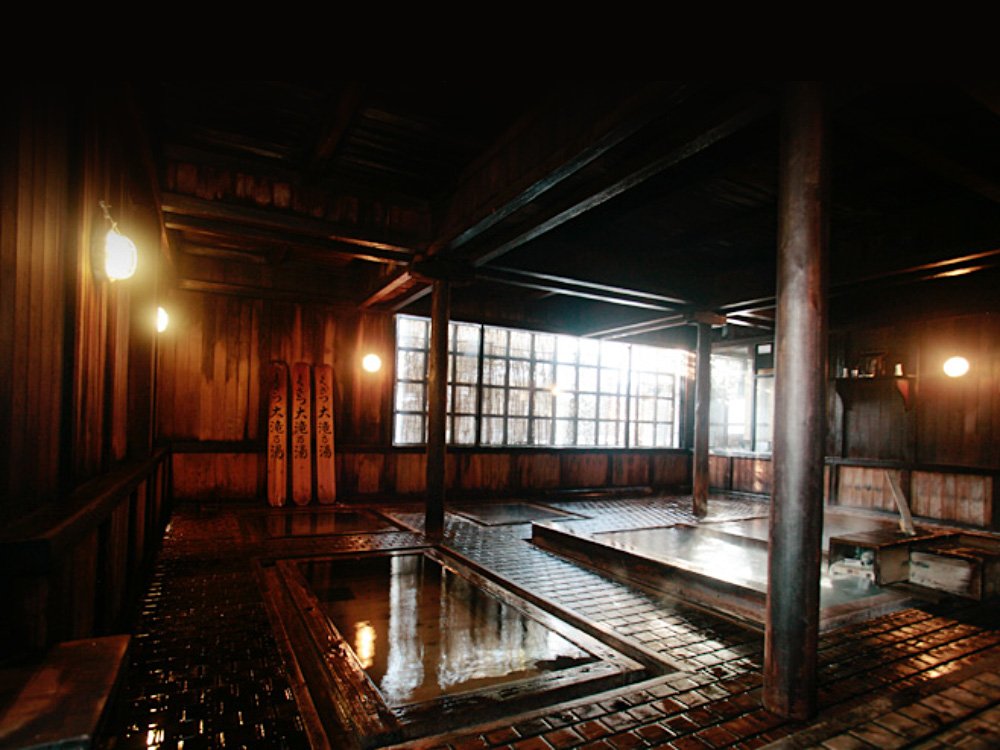 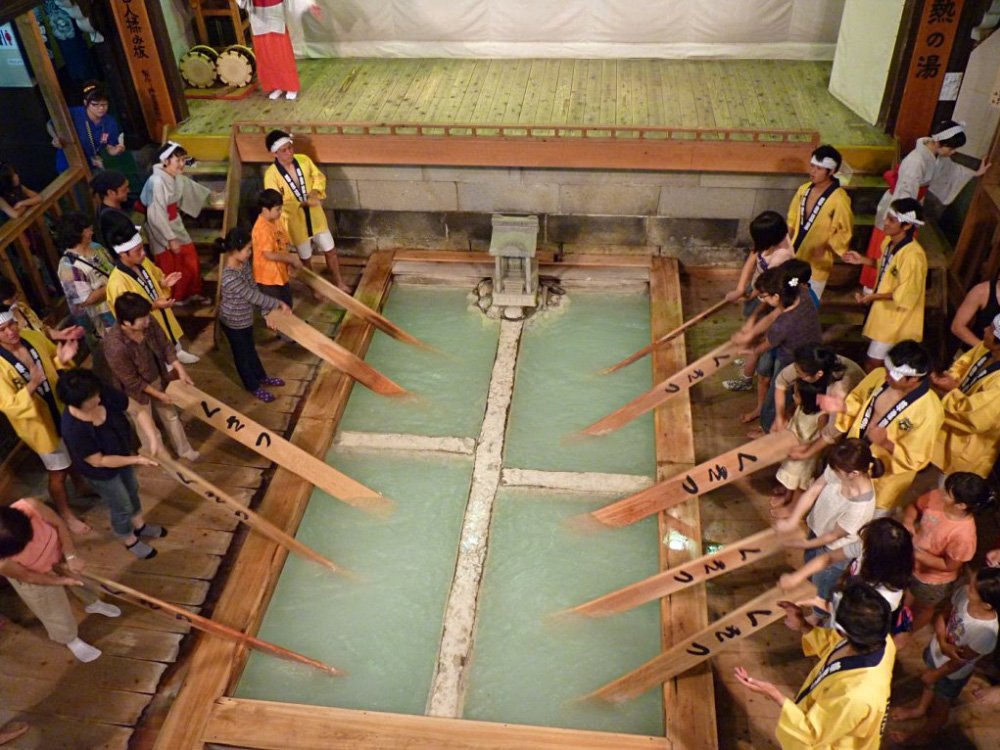 Kusatsu ski field is another reason why Kusatsu is one of the most popular onsen resorts in not only Kanto but in Japan. The combination of skiing, great onsen hot spring, great sake and food at night is a perfect winning formula in tourism.

How to get to Kusatsu

Hakone is hands down the top onsen in Japan. In terms of the fame, the number of visitors, the quality of accommodation and service and transportation, no other onsen can get close to Hakone. Its proximity to Tokyo (or Edo) has also helped maintain its fame and popularity for centuries. 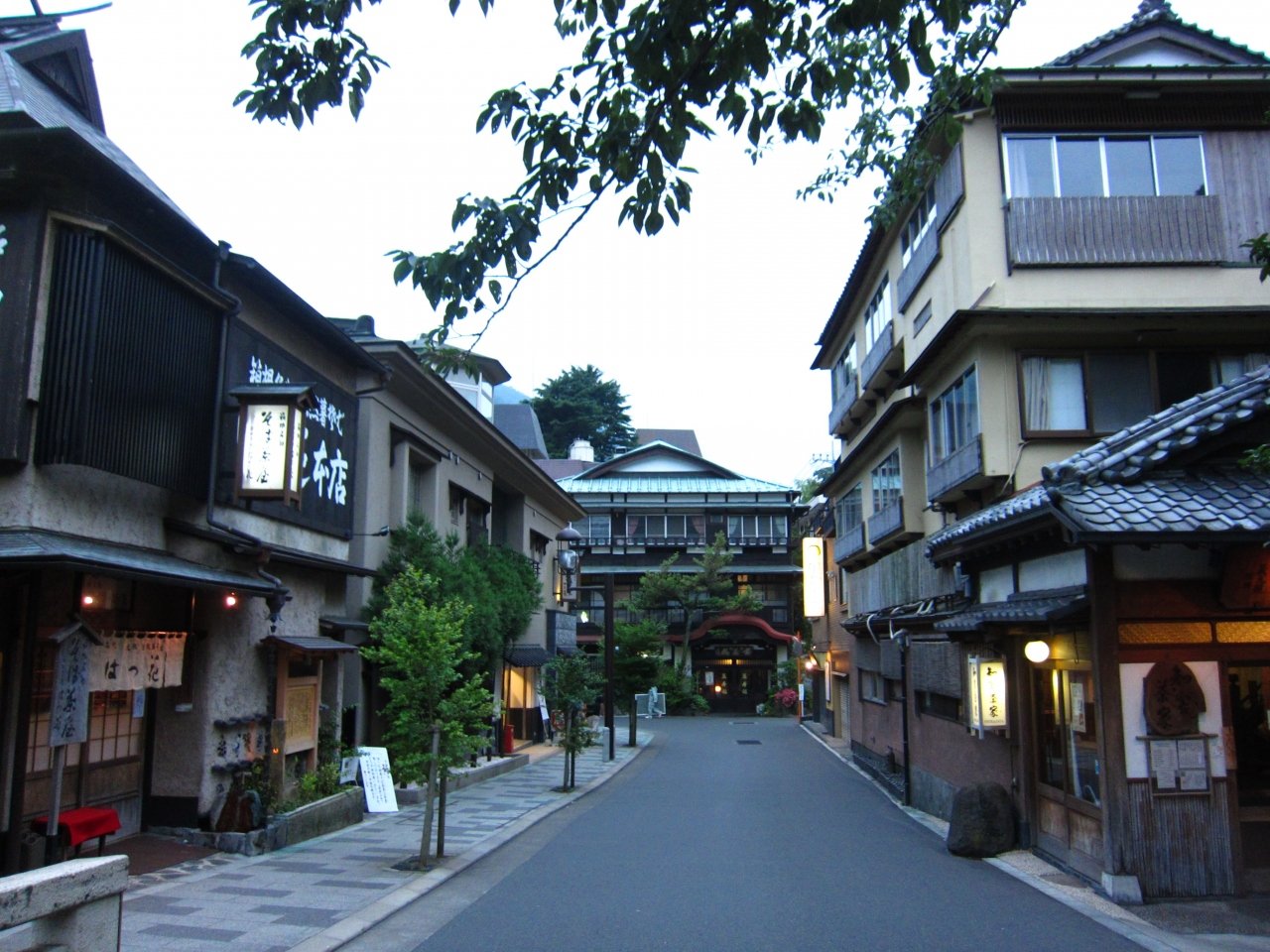 The first step to enjoy Hakone is to take Odakyu Romance Car (it’s a train, though) from Shinjuku to Hakone Yumoto. Odakyu Hakone Freepass is the way to go as it includes a return ticket from Shinjuku and lets you get on and off freely throughout the specified area (see here for more information).

Hakone-Yumoto (one of the best hot springs in Japan) is its most popular and famous hot spring, full of onsen ryokan and inns and public bathhouses, as well as great restaurants, cafes and interesting souvenir shops. 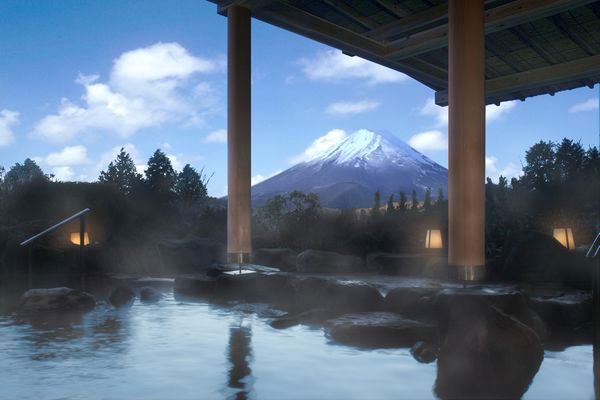 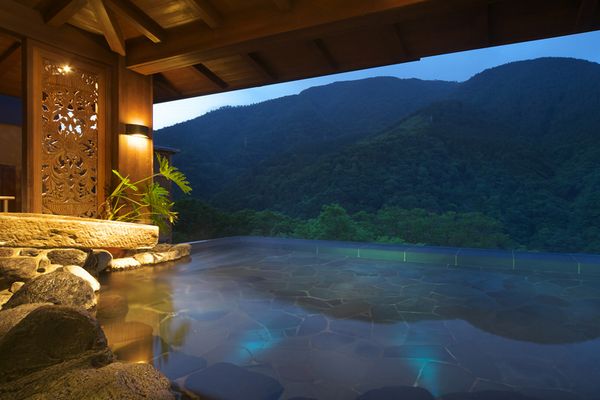 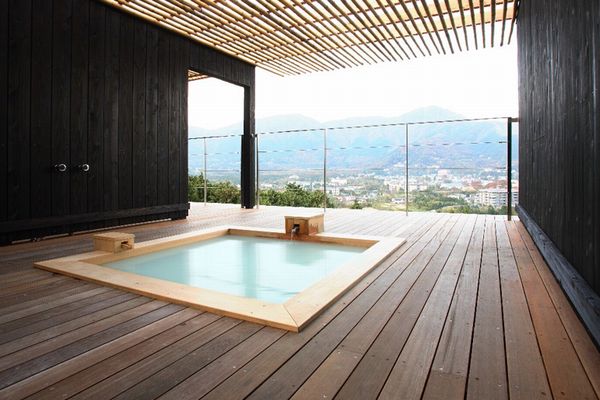 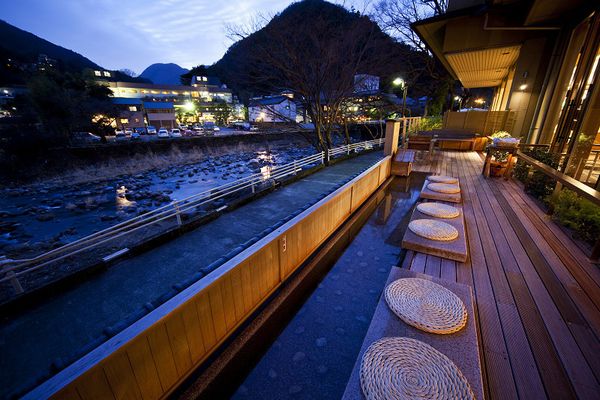 Some hotels have an onsen bath from which you get to enjoy Mt. Fuji as Hakone is only a stone away from the UNESCO World Heritage mountain. You just can’t get bored exploring Yumoto. You’ll want to go back once you get home. 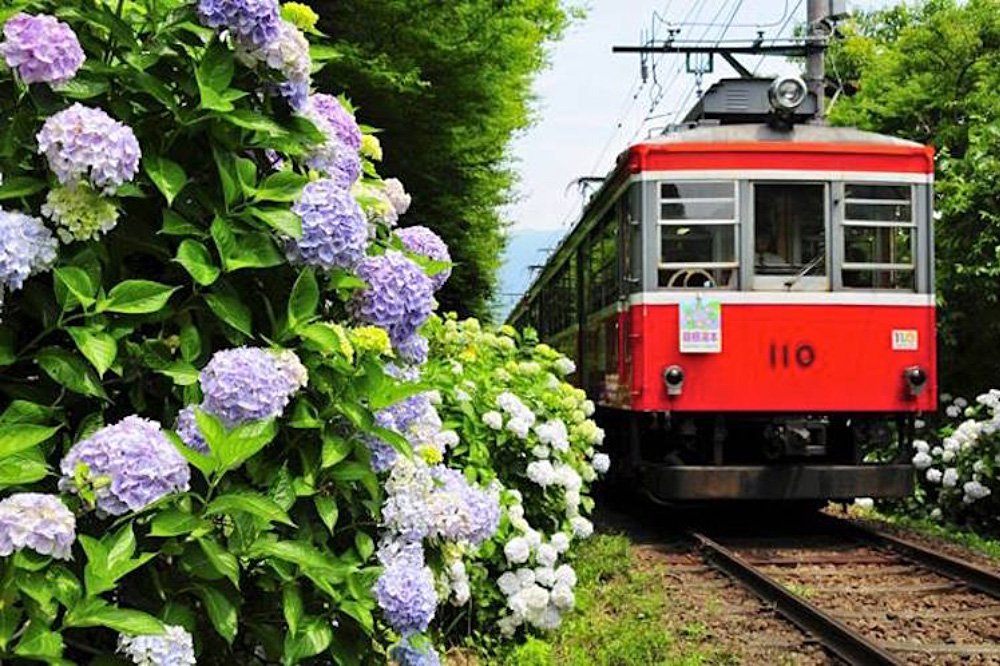 If time allows you, try to stay there for two nights. You can stay in Yumoto and explore various public bathhouses and other parts of Hakone. Hakone Tozan Railway, which runs between Odawara and Gora through Yumoto (see the timetable here), is a great way to explore the area. Make sure to visit Owakudani (‘Great Boiling Valley – eat onsen black eggs there), Hakone Open Air Museum, Lake Ashinoko (and take a picture of Mr. Fuji) and various souvenirs shops in Hakone.

If you have even more time, you can also explore greater Hakone, including Odawara (and try Odawara Hilton Hotel’s cool onsen pool), Gotemba Premium Outlet Store,

A few cautions for first visitors to onsen in Japan. Unlike hot springs overseas, there is a set of rules that you need to observe as you enter the hot water at onsen. Here is the quick list of very basic things you should or shouldn’t do when bathing in an onsen in Japan.

1. Take off ALL your clothes before going inside an onsen room.
2. Wash yourself thoroughly first, ideally with a wash towel, before entering the water.
3. Enter the water quietly (never hump in) and NEVER take the wash towel inside the water with you (except that you have it on the top of your head, not touching the water).

There are more minor rules of thumbs, but as long as you stick to the above rules, you can’t go wrong.

The best onsen in Japan

If you want to try onsen before you go or you miss onsen you’ve visited, you can always bring onsen to your home by trying onsen bath powders. Takaski’s most favorite onsen is actually at home – with Clear Bath Salts Pack by Tabino Yado, we get to try five different onsen powders, including Kusatsu and Hakone, right in the comfort of our home!